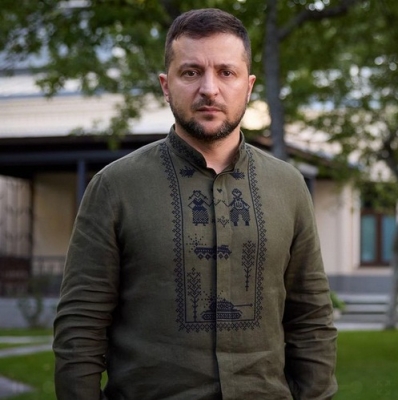 As Ukraine prepares to celebrate Independence Day on Wednesday and also mark six months since the Russian invasion began on February 24, President Volodymyr Zelenksy has warned citizens against massive shelling and possible provocations by Moscow.

In a video address to the nation on Tuesday evening, the President said: “Tomorrow (Wednesday) is an important day for all of us. And that is why this day, unfortunately, is also important for our adversary. We must be aware that tomorrow Russian provocations and brutal strikes are possible.

“The Armed Forces of Ukraine, our intelligence, special services will do everything to protect people, as much as possible. And we will certainly respond to any manifestation of Russian terror.

“But please be extra careful tomorrow. Please observe the curfew. Heed the air warning signals. Pay attention to official announcements. And remember: we must all achieve victory together.”

Zelensky also said he was grateful “to everyone who helps Ukraine… to everyone who, since February 24, has chosen the path of struggle for what makes life real: for freedom, for independence”.

The President also said he plans to present awards to Ukrainians who have contributed to the country’s strength for Independence Day, which marks 31 years since Ukraine broke away from the Soviet Union, dpa news agency reported.

“We have planned many activities, something that will emphasize the path we have covered. Covered together, Ukrainians in Ukraine, throughout our territory, free and temporarily occupied, because our people are fighting everywhere.”

The US also warned ahead of the date that Russia might use the anniversary to launch heightened attacks on Ukrainian civilian infrastructure and government facilities.

It encouraged any US citizens still in Ukraine to get out of the country.

US deputy UN ambassador Richard Mills specifically warned Russia that “as we approach Ukraine’s independence day, the world is watching” in comments to the UN Security Council on Tuesday.

“This should not need saying … please do not bomb schools, hospitals, orphanages or homes,” he said.

“We will continue to pursue accountability for any and all violations of international law.”