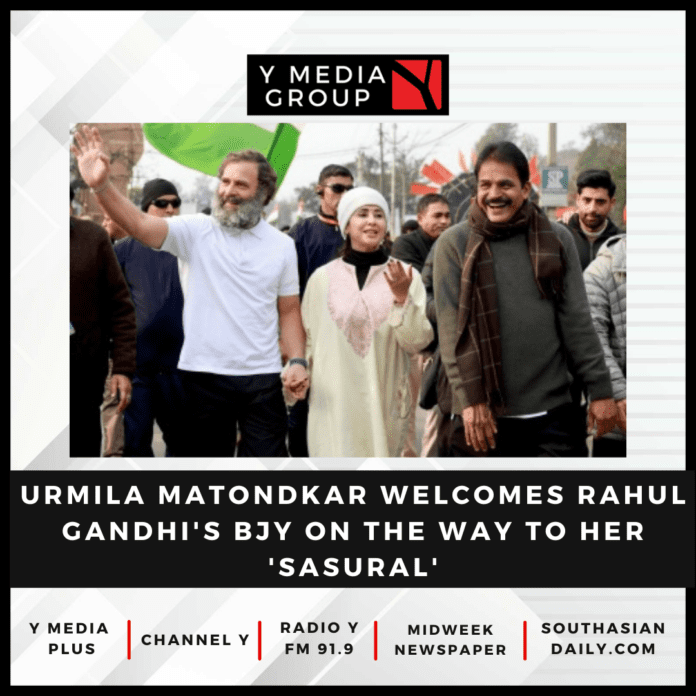 Bolstering the Bharat Jodo Yatra (BJY), Shiv Sena (UBT) leader and Bollywood belle Urmila Matondkar turned up in a dazzling Kashmiri attire to accord a warm welcome to Congress MP Rahul Gandhi, both braving the chilly temperatures at Nagrota town in Jammu on Tuesday.

After she “missed” Gandhi during his Maharashtra sojourn owing to film’s shooting schedules, Urmila said that she made it a point to “fly down” to Jammu and join the BJY as it enters its final phases in the border regions.

Sporting a rich cheesy-cream and rosy-pink ‘pheran’ over a black sweater, a white cap, black trousers and shoes, the chubby-cheeked Urmila made it clear: “no interviews”; but her teeth slightly chattering, she chatted a little on the cheerful tryst with her former Congress party boss. She quit the party in September 2019 and joined Shiv Sena (UBT) later.

As the excited crowds surged and craned their necks to catch a glimpse of the delightful meeting, onlookers said both Rahul and Urmila greeted each other like old pals as she joined the yatra (march) at Nagrota, which is some 225 kms from her ‘sasural’ in snowy vales of Srinagar.

Describing her first impressions, the ‘Rangeela’ heroine unabashedly gushed over how Rahul – in a simple white t-shirt, dark loose trousers and blue shoes – “looks on the top of the world” and “is seen in the best of form” as the BJY wends its way to terminate in Srinagar after a couple of weeks.

“I think he’s totally reincarnated himself. He is a much-changed person. He openly meets people, hugs them, interacts with children, youth and women, or all who are allowed to go near him. It was truly an amazing experience,” Urmila told IANS.

As Rahul, 52, kept up his quick meet and greeted the masses, Urmila, 48, managed to get his attention and views on a bouquet of topics – the state of the economy, inflation, the problems of youth, challenges for the women, unemployment, et al, as she footslogged with him for almost 100 minutes.

At one point, Rahul held Urmila’s right hand as they waved to the crowds, many furiously clicking pictures on their phones, and lustily cheering them on. She also showed the thumbs up sign, smiled, and enjoyed every moment in the BJY.

“It’s absolutely remarkable for someone who has lost his father (the late PM Rajiv Gandhi) and his grandmother (the late PM Indira Gandhi) to terrorism to undertake this long journey, for almost four months and nearly 4,000 kms,” said Urmila.

The actress said the BJY has made it crystal clear that the world cannot run on fear or hatred but on love. “Its all about spreading love and not hostilities and it comes out so beautifully with the locals, women, children and even Army jawans joining in.”

“For me, its more than politics, I was here not for a person or a party. It is the social relevance of the BJY that is extremely important. The manner in which Rahul Gandhi is eagerly propagating the message of love, equality and brotherhood, symbolises all that is Indian-ness,” Urmila said.

On the significance of BJY, she felt that the thought behind it is much bigger than to write it off in some political terms, especially when a person has gone walking across the entire country against all odds for so long.

“Rahul Gandhi’s message is loud and clear for all,” Urmila concluded on a determined but soft voice.