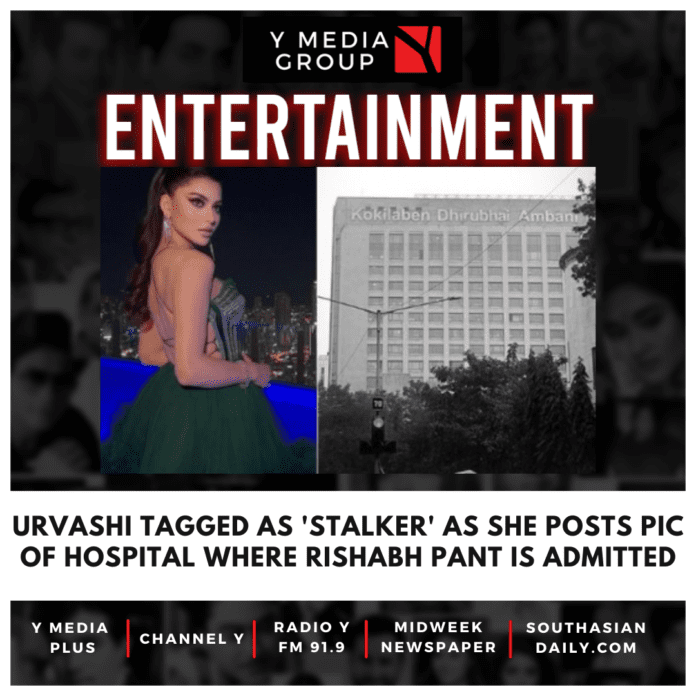 As soon as Urvashi posted the picture, netizens took to social media to slam her and even tagged her as a stalker.

A user wrote: “This Urvashi Rautela thing is so triggering. She’s stalking the guy and no one is stopping her? And this level of depravity while he’s in a hospital???.”

Another said: “When they will issue notice to #UrvashiRautela for stalking a man.”

One said that “this is mental harassment.”

The user added: “If a man did this, he’d either be in jail or have a Netflix crime documentary in his name.”

A user urged her to leave Pant alone.

“In India, Men do not have any recourse against obsessed Women It’s NOT FUNNY anymore @UrvashiRautela”, said another.

One tagged her as the “most toxic woman of the century”.

A user said that Urvashi is influenced by films such as ‘Darr’ and ‘Raanjhana’.

“I am not sure about Rishabh Pant, but I am very afraid of Urvashi Rautela. Seems to have been heavily influenced by Darr, Raanjhana and the likes.”

“Such a Cheap Tricks For Fame . He is Not Well went Through a Major accident . This is Not entertainment anymore this is mental Harassment!,” said an angered social media user.

India wicketkeeper-batter Rishabh Pant, who recently sustained injuries following a car accident, was brought to Mumbai from Dehradun in an air ambulance for surgery and subsequent procedures for ligament tears.

On December 30, early in the morning, Pant suffered multiple injuries when his car collided with a road divider and caught fire on the Delhi-Dehradun highway. The horrific car accident happened between Manglaur and Narsan in Haridwar district in the state of Uttarakhand, when the cricketer was on his way to his hometown Roorkee in his Mercedes car.