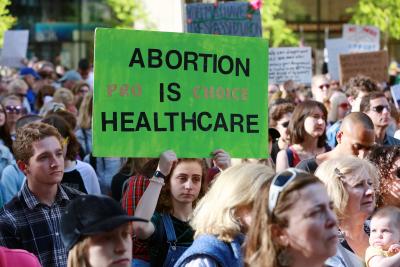 Abortion clinics across the US have begun to shut after the Supreme Court overturned its 50-year-old Roe v. Wade decision which granted women constitutional right to abortion.

In the wake of the 5-4 order on Friday, about half of states are expected to introduce new restrictions or bans, out of which 13 have outlawed abortion effective immediately, reports the BBC.

Meanwhile, bans in Mississippi and North Dakota will come into effect after their Attorney Generals approve it.

While Wyoming’s ban will take effect in five days, Utah’s ban must be certified by a legislative council

Bans in Idaho, Tennessee and Texas will be applied in 30 days.

At an abortion clinic in Little Rock, Arkansas, the doors to the patient area shut as soon as the court’s opinion was posted online on Friday afternoon.

Staff made calls to tell women that their appointments were cancelled.

“No matter how hard we prepare for bad news, when it finally hits, it hits hard. Having to call these patients and tell them Roe v. Wade was overturned is heartbreaking,” a nurse at the clinic told the BBC.

In New Orleans, Louisiana, the Women’s Health Care Centre, one of only three abortion providers in the state, was also closed.

Due to the Supreme Court ruling, about 36 million women of reproductive age will lose access to abortion, the BBC quoted research from Planned Parenthood, a healthcare organisation that provides abortions, as saying.

Meanwhile, the decision was met with elation by anti-abortion campaigners outside the court in Washington, but protests against the ruling were due to be held in more than 50 cities across the US.

The ruling has led to widespread criticism.

“It’s a realisation of an extreme ideology and a tragic error by the Supreme Court,” he said.

Slamming the verdict, Nancy Pelosi, the Democratic Speaker of the House of Representatives, said the “Republican-controlled Supreme Court has achieved the GOP’s dark and extreme goal of ripping away women’s right to make their own reproductive health decisions”.

“American women today have less freedom than their mothers… This cruel ruling is outrageous and heart-wrenching. But make no mistake: the rights of women and all Americans are on the ballot this November.”

The Governors of California, Washington and Oregon have vowed to protect patients travelling from other states for an abortion.

The landmark 1973 Roe v Wade case saw the Supreme Court rule by a vote of seven to two that a woman’s right to terminate her pregnancy was protected by the US constitution.

The ruling gave American women an absolute right to an abortion in the first three months (trimester) of pregnancy, but allowed for restrictions in the second trimester and for prohibitions in the third.