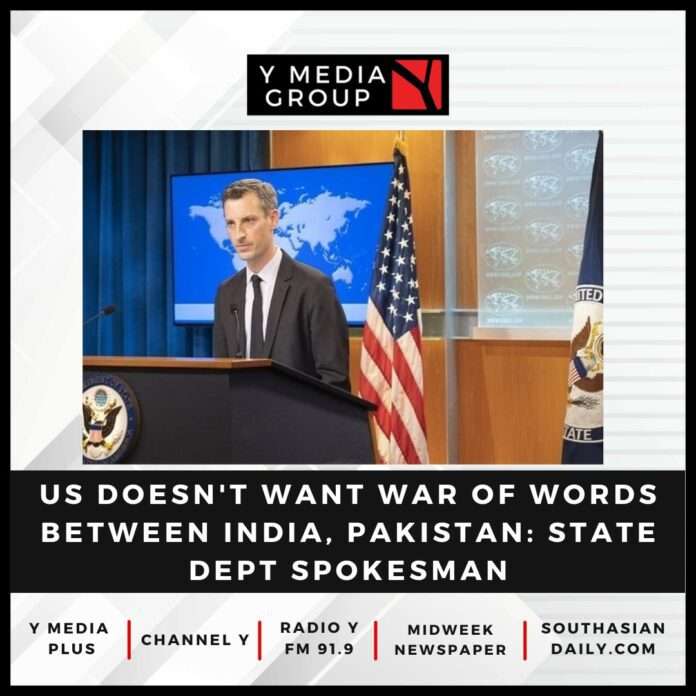 “The fact that we have partnerships with both countries makes us, of course, leaves us, not wanting to see a war of words between India and Pakistan,” Price said on Monday at his briefing in Washington.

“We would like to see constructive dialogue between India and Pakistan (and) we think that is for the betterment of the Pakistani people, for the Indian people.”

He said that “there are differences that, of course, need to be addressed between India and Pakistan” and “the US stands ready to assist as a partner to both”.

Asserting that the issues between the two neighbours are bilateral issues with no scope for a third-party involvement, India has rejected previous offers by US administrations — most recently by former President Donald Trump — to facilitate talks or to mediate.

Price made the statement in response to a question from a reporter who mentioned India’s External Affairs Minister S. Jaishankar’s statements about Pakistan’s support for terrorism and Bhutto-Zardari making a vitriolic personal attack on Modi.

Bhutto-Zardari is in Washington and is expected to meet US officials and members of Congress.

But the State Department’s public schedule for Tuesday does not list any engagement with him.

Asked about the nature of US relations with India and Pakistan, Price reiterated his earlier contention that they stand on their own, were not a “zero-sum game” and Washington does not “view them in relation to the other”.

“Even as we deepen our global strategic partnership with India, we also have a relationship in which we can be candid and frank with one another. Where we have disagreements or concerns, we voice those just as we would with our Pakistani friends as well,” he said.

On Ukraine, over which, India and US have different approaches, Price played down the differences pointing to Modi telling Russian President Vladimir Putin “this is not the era of war”.

He said that “it’s notable that the communique emanating from the G20 also had very similar language” that “this was a call that resonated in this country, in South Asia, in Europe, and around the world”.

“The US certainly welcomes it,” Price noted.

He said that Modi’s remark was “also important because India has a relationship with Russia that the US does not have”.

India took over the presidency of the G20 group of major industrialised and emerging economies this month.

Price said” “There is a lot of good that we can do together, not only for our two countries but around the world, and I think we’ll see a good example of that in the coming year when India hosts the G20.

“I know we’ll have an opportunity to travel to India, to be in close touch with India in the context of the G20, and we’ll be able to see what cooperation between our two countries and a broader set of countries can provide.”

Price saw a shift in New Delhi-Moscow relations with hopes of Washington now emerging as a preferred partner.

“Russia was prepared to be a partner to India in a way that the US at the time was not.” he said of the close ties of those two countries.

“Of course, that has changed in recent decades. It is a bipartisan legacy of the last several administrations, perhaps starting most notably with the administration of President George W. Bush, that the US is now a partner of we hope first resort for India,” he added.