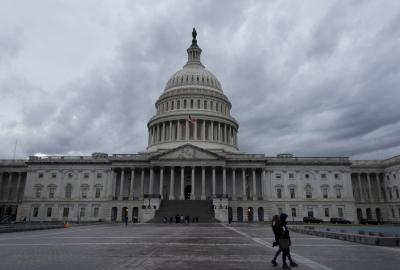 Democrat lawmakers in the US House has passed a sweeping health care, tax and climate change bill.

Friday’s vote was 220-207, with all Democrats voting in favour and all Republicans opposing, reports dpa news agency.

With the midterm elections quickly approaching, congressional Democrats have had a series of legislative victories in recent weeks, expanding NATO, securing health care and benefits for veterans exposed to toxic burn pits, investing nearly $53 billion into the US semiconductor industry and passing bipartisan gun safety legislation.

That momentum has culminated into passage of the Inflation Reduction Act, an offshoot of the many versions of President Joe Biden’s failed Build Back Better Act.

The IRA, which the Senate advanced on Sunday with Vice President Kamala Harris breaking a tie, now heads to Biden’s desk for his signature.

With Biden poised to sign the bill in the coming days, House Democrats say their focus should now shift to touting its benefits to Americans.

They readily admit they failed to adequately communicate to the American people how previous massive legislation that passed this Congress would improve their lives, including last year’s $1 trillion infrastructure package.

Representative Ro Khanna said Democrats need an “all-hands-on-deck approach” that gets beyond the media and the beltway, and directly into communities.

Forty-one per cent of Americans are familiar with the Inflation Reduction Act, according to a Reuters/Ipsos poll released this week.

More than a quarter of respondents, however, said they’ve never heard of the legislation, while nearly a third acknowledged having heard of it but not knowing more about it.

The bill will allow Medicare to negotiate some prescription drug prices, cap out-of-pocket drug expenses for Medicare beneficiaries at $2,000 per year and cap drugmakers’ price increases.

On climate, it will reduce emissions by about 40 per cent by 2030, proponents say.

The measure will also impose new taxes on wealthy corporations and their stock buyback programs, and provide funding to beef up the Internal Revenue Service’s taxpayer services and enforcement.

It includes $4 billion to address the water crisis along the Colorado River.

Speaker Nancy Pelosi framed the legislation as a “kitchen table issue” at a news conference hours ahead of the vote.

“If you are sitting at your kitchen table and wonder how you’re going to pay the bills, your health care bills, your prescription drug bills, this bill’s for you,” Pelosi said.

In a lengthy floor speech, House Minority Leader Kevin McCarthy panned the legislation as a “misguided, tone-deaf bill” that will raise taxes and hand “out tax credits like candy with no accountability”.

Progressives cheered the legislation while acknowledging they would have preferred it had gone further to fight climate change and bolster the nation’s social-safety net.