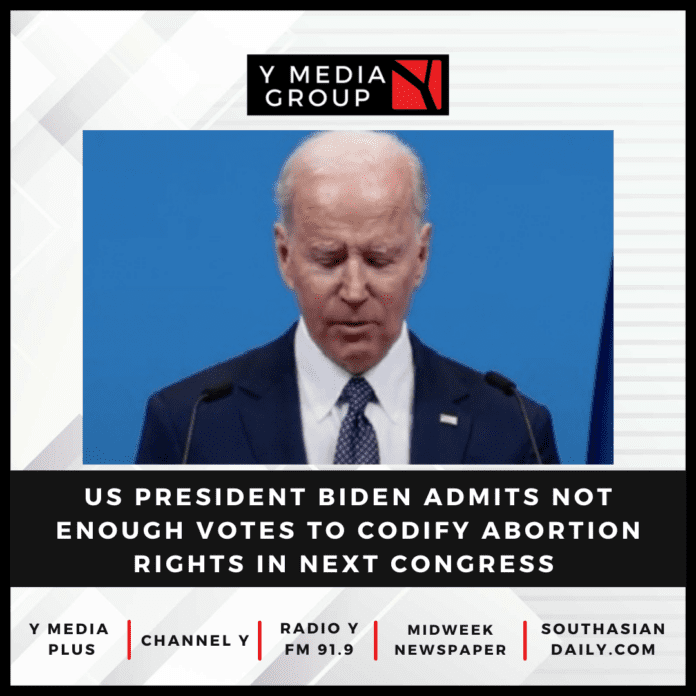 US President Joe Biden admitted that he did not expect Democrats to have enough votes in the next Congress to codify abortion rights.

“I don’t think there’s enough votes to codify, unless something happens unusual in the House,” Biden told reporters in Bali on Monday on the sidelines of the G20 Summit which began in the Indonesian resort island on Tuesday.

The remarks came as control of the US House of Representatives remains uncertain, nearly a week after the November 8 midterm elections across the country.

As of Monday afternoon, Republicans have won 212 seats out of all 435 House races this year versus 204 for Democrats, according to CNN projections.

Nineteen elections in states including Alaska, Arizona, California, Colorado and Maine have yet to be called.

It takes at least 218 seats to claim control of the lower chamber of Congress, where Democrats have a slim majority this term.

“I think we’re going to get very close in the House,” Biden said on Monday.

“I think it’s going to be very close, but I don’t think we’re going to make it.”

Exit polls released last week showed that abortion was a major motivating issue for American voters in the midterms.

The Supreme Court overturned the landmark Roe v. Wade earlier this year, which eliminated the constitutional protection of abortion rights for women.

Without the 1973 landmark ruling, states are able to impose their own legislation on abortion, which has been one of the most divisive issues in the US.

Democrats have been projected to retain majority status with at least 50 seats despite Georgia’s race headed to a runoff next month.

The upper chamber is currently divided 50-50, with Vice President Kamala Harris able to cast the tie-breaking vote in favour of Democrats.