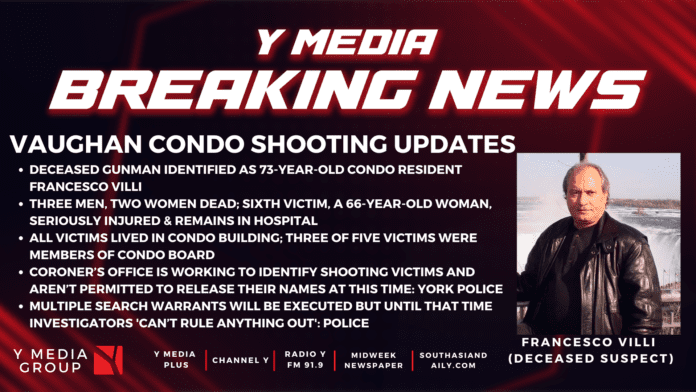 Three men and two women were killed, said York police in a news conference on Monday afternoon. A sixth victim, a 66 year old woman, was seriously injured and remains in hospital. York police say they are protecting her identity at this time

All victims live in the condo building, York police said, and confirm that three of the victims were members of the condo board.

Multiple search warrants will be executed, said police, but until that time investigators “can’t rule anything out.”

York Regional Police have been notified that the coroner’s office is working to identify the shooting victims and aren’t permitted to release their names at this time.

When police arrived, an interaction occurred between the officers and a male subject and the subject was shot. He was pronounced deceased at the scene. York Regional Police has notified the Special Investigations Unit (SIU).

The Emergency Response Unit has conducted a thorough search of the building to ensure there are no additional victims and that it’s safe. A police presence will be on scene as the investigation continues.

“We offer our sincere condolences to the victims and their families,” said Chief MacSween from the scene, adding there is no further threat to public safety.

The investigation is active and ongoing. Updates will follow.

The SIU is urging anyone who may have information about this investigation, including video or photos, to contact the lead investigator at 1-800-787-8529 or online at: https://siu.on.ca/en/appeals.php