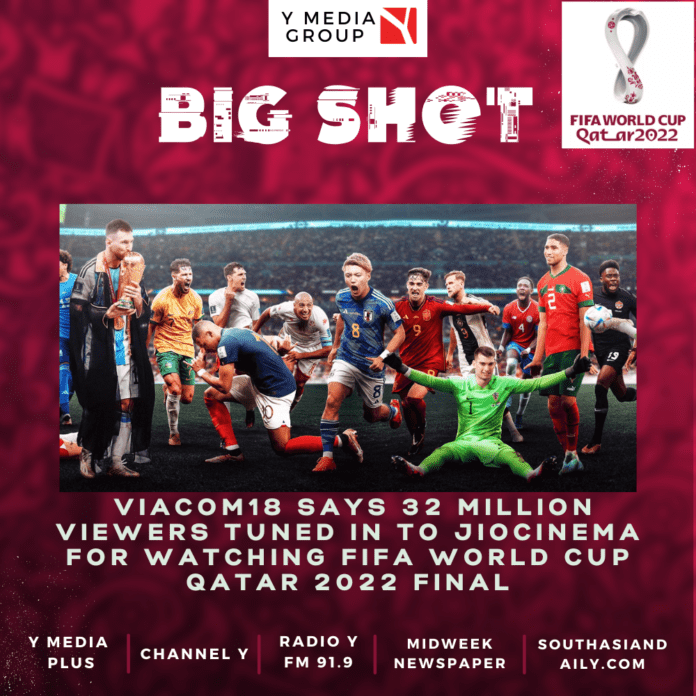 Even as curtains come down on the FIFA World Cup Qatar 2022, Viacom18 said on Monday that a monumental 32 million viewers tuned in to JioCinema app to watch the final on Sunday, where Lionel Messi-led Argentina picked the trophy for the first time since 1986.

“Over 110mn viewers consumed the content on digital, making India one of the highest digital viewership markets for the FIFA World Cup. On the back of nail-biting contests and riveting upsets, the FIFA World Cup Qatar 2022 held India’s attention with a mammoth 40bn minutes of watch-time being clocked across Sports18 and JioCinema, which continued to be the No. 1 downloaded free app on iOS and Android throughout the tournament,” they said in an official statement.

The solid digital viewership of the event, according to Viacom18, was supported by the wide availability of the app on multiple OEM and CTV platforms such as Jio STB, Apple TV, Amazon Firestick, Sony, Samsung, LG, and Xiaomi, among others.

“We promised to give consumers easy access to the world-class presentation of the FIFA World Cup Qatar 2022, and on the back of that, the tournament became the most-watched global sports event on digital where India has not participated,” said Viacom18 Sports CEO Anil Jayaraj.

CTV viewers watched the world’s most prestigious football tournament in UHD 4K for the first time through JioCinema.

“This demonstrates the power of digital and the preference viewers and fans have shown to consume their favourite events, which will now see Paris Saint-Germain teammates and FIFA World Cup Golden Boot winner Kylian Mbappe and FIFA World Cup and Golden Ball winner Lionel Messi join forces in the Ligue1,” added Jayaraj.