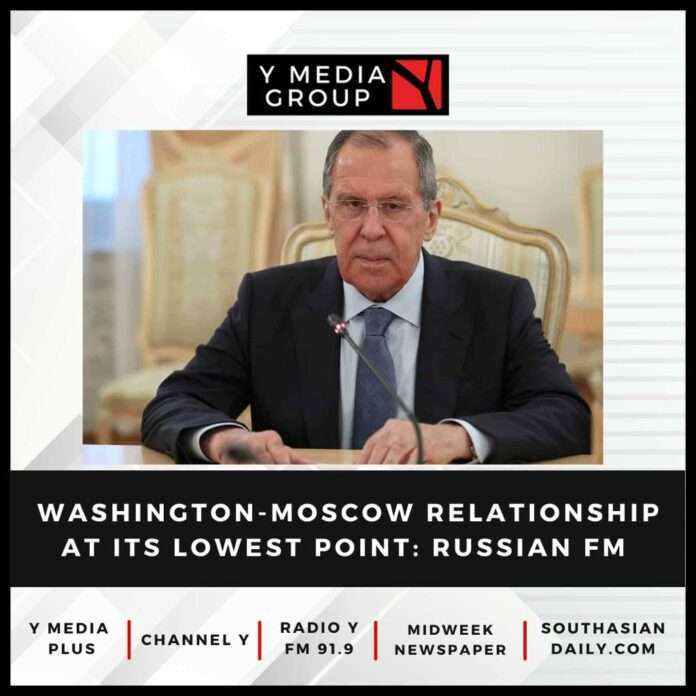 Russian Foreign Minister Sergey Lavrov has said that the Washington-Moscow relationship is at its lowest point.

“Indeed, Russia-US relations are in an extremely poor state. They have become practically frozen through the fault of Washington. Its confrontational anti-Russia policy is becoming increasingly exacerbated and comprehensive. It is objectively impossible to maintain any kind of normal communication with the Biden administration…,” Lavrov told TASS news agency in an interview.

“Undoubtedly, our relations with the European Union have deteriorated to a historic low. The reasons for this are well known. Since the beginning of the special military operation, Brussels, following the US and NATO, has declared a hybrid war against Russia. EU chief diplomat Josep Borrell was among the first to voice the opinion that Russia must be defeated on the battlefield,” he added.

The Russian minister further claimed that the US is the “main beneficiary of the military conflict as it seeks to reap the biggest benefits from it in economic and military-strategic terms. At the same time, Washington is addressing an important geopolitical goal, which is to destroy the traditional ties between Russia and Europe and to overpower its European satellites even more”.

“…The Pentagon is openly planning more orders for the US defence industry for years to come, keeps raising the bar for military spending to cover the needs of the Ukrainian forces and wants other members of the anti-Russia alliance to do the same,” he added.

“The Kiev regime is deliberately flooded with the most advanced weapons, including samples that have not yet been put into service in the Western armies apparently in order to see how they will do in combat conditions. The volume of military aid provided to the regime has exceeded $40 billion since February, which is comparable to the military budgets of many European countries. We are also aware of the fact that the US political circles are increasingly thinking about drawing Ukraine into NATO using every available avenue,” Lavrov asserted.

On allegations surrounding the use of nuclear weapons, he refuted, terming it “propaganda”.