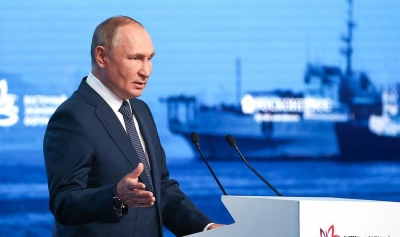 Western leaders fear that Vladimir Putin is planning a huge escalation of Russias faltering invasion of Ukraine with a deadly nuclear strike or an attack on European interests, media reports said.

British and American spies believe there is ‘credible intelligence’ to suggest that the Russian President is preparing an attack that will turn the war effort in his favour, after coming to the realisation that the war was ‘a colossal mistake’, Daily Mail reported.

It comes as the US Embassy in Moscow is urging citizens to flee Russia amid fears that dual nationals could be drafted into its war efforts, The Mirror reported.

Embassy officials have said Russia may ‘refuse to acknowledge US nationals’ dual citizenship’, deny their access to consular assistance and ‘prevent their departure from Russia’.

The Embassy also warned that leaving Russia has become increasingly difficult with flights filling and Putin’s troops shutting down borders.

Putin is understood to be planning land-grab of four regions said to have voted overwhelmingly to join Russia after sham referendums in which residents were marched to the ballot box at gunpoint, Daily Mail reported.

Hastily arranged votes had taken place over five days in the four areas – Donetsk, Luhansk, Zaporizhzhia and Kherson – that make up about 15 per cent of Ukrainian territory.

But there is concern that Putin is planning a nuclear attack west of the regions that would create a radiation dead zone and put a halt to Ukraine’s so far successful counter-offensives, Daily Mail reported.

Another fear is that Russia is preparing a strike on western interests such as maritime communications cables.

Officials in the UK believe that Putin, as well as the Russian population, now understand the war was a ‘colossal mistake’, Daily Mail reported.

They also fear the partial mobilisation of 300,000 conscripts may be con to deceive the West into concentrating on Ukraine while he tried to leverage against support for Kiev.

It comes amid fears that Kremlin frogmen are responsible for the ‘deliberate’ sabotage of the Nord Stream gas supply pipeline in the Baltic Sea that has sent energy prices soaring.

Security sources told The Mirror that the leaks could act as a warning of similar assaults on communications cables.

They added: “Putin has almost run out of options which makes a tactical nuclear strike possible west of the four regions he is claiming.

“It is possible he believes this will be enough as a show of intent to get the west to back off, create a dead zone to halt the Ukrainian counter-offensive and claim victory in the east.

“But another possibility is an attack on the communication cables between the UK and America, many of which are European links to the States.”

Damaging internet communication cables could be ‘very damaging’ for the world’s financial markets.