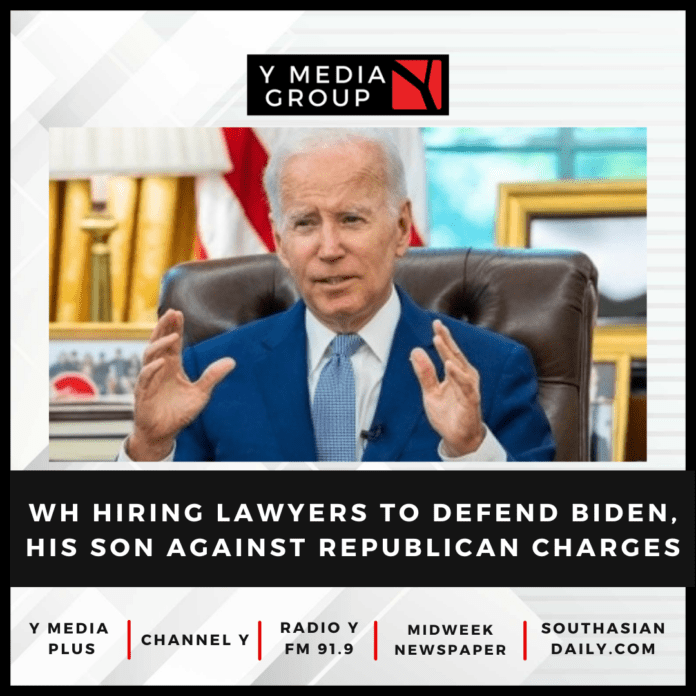 With Republicans re-taking the House of Representatives in the November Midterms, the clock seems to have turned a full circle, with loyalists of former US President Donald Trump in GOP wanting to launch probes against incumbent President Joe Biden and his son Hunter Biden for the latter’s China connections in what seems to be a vengeance for January 6 probe report becoming public linking Trump with inciting the riots on Capitol Hill.

But the GOP faces a tough call from the White House whose lawyers have told two leading Republicans that the oversight requests they issued during the last Congress would be invalid in the present Congress and they have to be reissued when the Congress meets in January 2023.

Trump loyalists in the Republican party had said they would scrap all the investigations against the former president including the January 6 panel which preempted them by releasing its final report and the DoJ has referred criminal charges against the ex-president besides the litany of multiple probes by the New York Attorney general for tax fraud at Trump Businesses and the Jury accusing him of criminal avoidance of taxes.

According to a top White House lawyer, two leading Republicans were told to reissue their oversight requests.

The letters sent to Reps. Jim Jordan and James Comer, the incoming chairmen of the House Judiciary and Oversight committees, give a sneak peek at how the White House plans to contend with what are expected to be a litany of Republican probes which Biden’s team views as politically motivated.

A leading US media outlet report says that the White House has been working during the last months to assemble a battery of lawyers and other advisers to handle an expected onslaught of oversight requests.

Thursday’s letter is the first indication of the team’s approach � one that vows cooperation but nonetheless pushes back on what the White House views as over-steps.

Jordan and Comer launched their requests for records from the Biden administration once it became clear that the November midterms would allow them to retake the house of reps. They had set deadlines in December.

But in his letter, Special Counsel to the President Richard Sauber says the two Republicans don’t yet have a standing to make their requests — and that they would need to resubmit their requests once the new Congress begins in the New Year, hardly two days away for 2023 to dawn.

“Congress has not delegated such authority to individual members of Congress who are not committee chairmen, and the House has not done so under its current Rules,” wrote Sauber, who is one of the White House’s top oversight lawyers, CNN said.

“Should the Committee issue similar or other requests in the 118th Congress, we will review and respond to them in good faith, consistent with the needs and obligations of both branches. We expect the new Congress will undertake its oversight responsibilities in the same spirit of good faith,” Sauber wrote.

Politico first broke the news on the letters sent by White House counsel Sauber to the two Republicans.

House Republicans have pledged to investigate multiple issues related to the Biden administration, including the 2021 withdrawal from Afghanistan, Hunter Biden’s business engagements and the federal government’s response to school board meetings, media reports said.

Jordan and Comer have threatened to use subpoenas to obtain documents and information from the administration.

The White House said Biden administrations would remain focused on more important national priorities and foreign policy issues even as the Republicans mount their demands for investigations.

Media reports said that the House Judiciary Republicans responded to the White House lawyers’ letter on Twitter accusing the Biden administration of “playing games”, and adding: “It shows how scared you are of important congressional oversight, particularly one where your administration targeted parents protesting at local school board meetings.”

“This is why it’s so important for us to hit the ground running on January 3rd,” they added.

In a statement, Comer said: “President Biden promised to have the most transparent administration in history but at every turn the Biden White House seeks to obstruct congressional oversight and hide information from the American people.”

White House officials are of the view that Republicans will overstep in their demand for oversight requests and they would boomerang on them.

The American public will not swallow the Republican tirade. The Democrats are voicing their protests to the Republicans demand for oversights claiming they were based on conjectures and that the proposed investigations were actually based on conspiracy theories and politically motivated charges.

“As we have over the past two years, we intend to work in good faith to provide appropriate information to Congress, but Americans have made clear they expect their leaders in Washington to work together on their top priorities, like lowering costs. That’s what the president will focus on, and we hope House Republicans join him,” Ian Sams, a spokesman for White House Counsel’s Office, said in a statement.