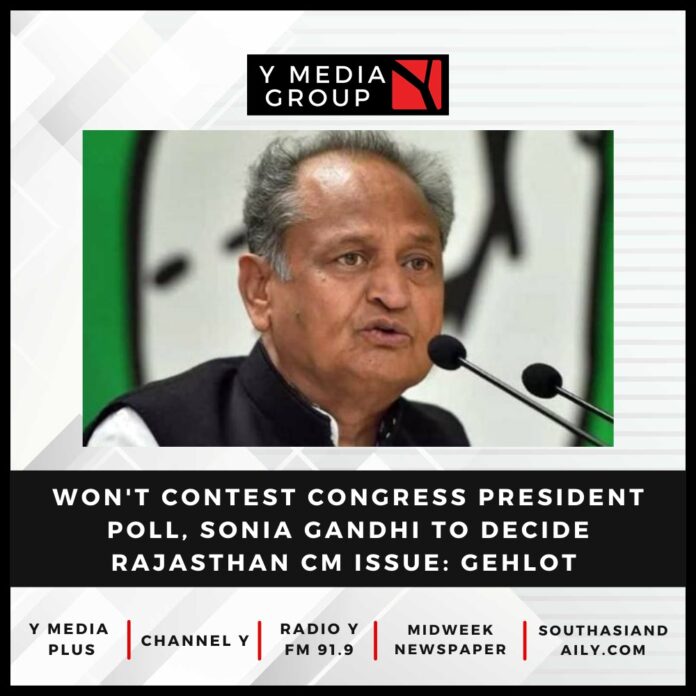 After over an hour-long meeting with Sonia Gandhi at her residence here, Ashok Gehlot said that he will not contest the Congress presidential poll and the issue of Rajasthan chief ministership will be decided by her.

Gehlot said, “In this environment I don’t want to contest and the issue of chief ministership will be decided by the party high command. Whether I remain the CM will be decided by Madam (Sonia Gandhi)… I am a loyal soldier of the Congress from Indiraji’s time. I have expressed regret and sadness over whatever happened in Jaipur.”

Earlier, while entering Sonia Gandhi’s residence at 10 Janpath, Gehlot was seen carrying a set of papers. On one of the papers, it was written — “Whatever has happened is sad and I am also hurt.”

“I have always acted as a loyal soldier of the party. The incident that happened on the day of the legislature party meeting has left everyone shaken. It gave a message as if I wanted to continue as the Chief Minister, so I apologised to her,” Gehlot said after the meeting.

The meeting came a day ahead of the last date of nomination for the Congress presidential poll. Ahead of Thursday’s meeting, Sonia Gandhi’s emissary Mukul Wasnik had met Gehlot.

Meanwhile, senior leader Digvijaya Singh will file nomination for the post of Congress president for which election is scheduled to be held on October 17.

Sources close to Singh said that the decision to contest the polls was his personal one, and none from the Gandhi family asked him to do so.

Congress’ initial plan was to field Rajasthan Chief Minister Ashok Gehlot for the top party post, but the high-octane drama in Jaipur has miffed the Gandhis.