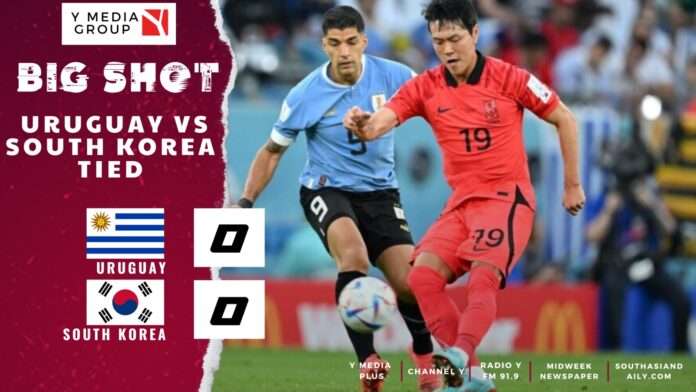 Former champions Uruguay and South Korea played out a goalless draw in their Group H opener at the 2022 FIFA World Cup here on Thursday.

Watched by a vibrant crowd at the Education City Stadium both teams had plenty of attacking quality on show but nothing could separate the two at the end of the 90-minute and had to settle for a point each in the group which consists of Ghana and Portugal.

Uruguay were unlucky twice in the match, first with a minute to go for the first half when Diego Godin’s header hit the post.

The metal work came between Uruguay and a goal again in the final minute of normal time when a long ranger flew past Kim Seunggyu in the Korean goal and rattled the post but did not end in the back of the nets much to the disappointment of the Uruguay fans.

At the other end, the South Koreans frustrated Uruguay coming out with plenty of attacking intent and endeavour but did not create many clear-cut opportunities and the only occasion they came close to scoring was in the 34th minute.

Ui-jo Hwang who was put in the clear by Moon-Hwan Kim in the box made a mess of the situation by firing his effort over the crossbar.

South Korea had controlled most of the first half but Uruguay began to dominate as the game wore on.

The advent of Cavani turned matters for Uruguay and they looked lively. Uruguay became more lively after Cavani came on with just little over 20 minutes left – and he soon had a shot blocked and just failed to connect with a cross-shot from Darwin Nunez.

Thereafter, Nunez makes a great run down his team’s left hand side after a beautiful ball from Diego Godin but his good work comes to nought.

Earlier, Godin became the oldest player ever to represent Uruguay at a FIFA World Cup. At 36 years and 281 days, he broke Obdulio Varela’s record by just two days.

Uruguay almost won it in the final minute of normal time when Federico Valverde’s long-range effort crashed off the post.

However, it could have also gone the other way when a minute later Uruguay goalkeeper Sergio Rochet gifted South Korea the ball but Son Heung-min – South Korea’s star man – but he dragged his shot wide, much to the relief of the Uruguayan supporters.

Uruguay, the first ever winners in 1930 and again in 1950, are at their 14th World Cup. South Korea, who are at their 10th consecutive World Cup, and 11th overall, failed to get out of their group in the last two editions and Uruguay had beaten South Korea 1-0 in their first World Cup meeting in 1990.

4 mistakes you make while eating fruit