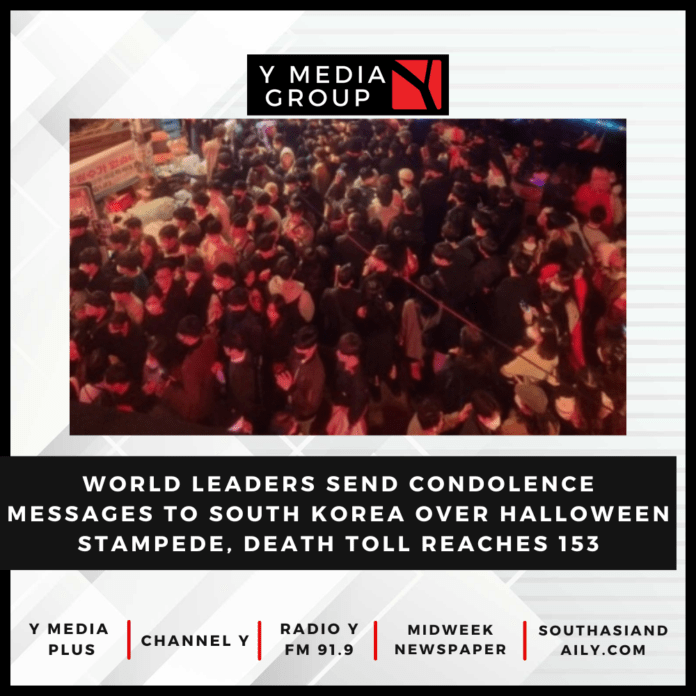 UK Prime Minister Sunak said in a tweet, “All our thoughts are with those currently responding and all South Koreans at this very distressing time.”

In a message written in French and Korean, French President Emmanuel Macron said, “I extend my condolences to the citizens of Seoul and the Korean people in the Itaewon disaster. France is by your side.”

German Chancellor Olaf Scholz said in a tweet that his country is “deeply saddened by the tragic events in Seoul,” calling it “a sad day for South Korea.”

“We embrace the families and friends of those who lost their lives or are injured by the unfortunate tragedy in South Korea. We also send our most sincere solidarity to the people and government of that country,” the tweet read.

Josep Borrell, the foreign policy chief of the European Union, said, “Deeply saddened by the terrible events in central Seoul. What meant to be a celebration turned into a tragedy with so many young casualties. We are with the people of the Republic of Korea at this difficult moment,”

U.S. National Security Adviser Jake Sullivan wrote in a tweet that he hoped for “a quick recovery for those injured” in the “heartbreaking” accident and that the U.S. “stands ready to provide the Republic of Korea with any support it needs.”

U.S. Secretary of State Antony Blinken also said, “We send our thoughts and deepest condolences to the family and friends of the deceased and injured, as well as to the people of the ROK as they mourn this horrific tragedy,” referring to Korea by its official name, the Republic of Korea.

U.S. Deputy Secretary of State Wendy Sherman left a tweet extending her “deepest condolences,” hoping for “a speedy recovery for all those injured.”

“We stand with the people of the Republic of Korea in mourning,” she wrote.