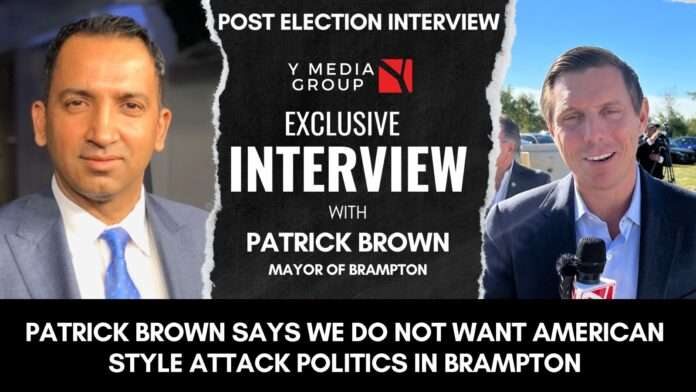 In an exclusive interview with Y Media Group Editor and CEO Yudhvir Jaswal, re-elected Brampton Mayor Patrick Brown said he does not want “attack politics” like the US here in Brampton.
“It’s a great new day in Brampton. Days are done for those who favour nepotism, favouritism, and a corrupt old-guard system. Now we can focus squarely on advancing the best interest of Brampton.”
“I’m excited that we’re going to be able to advance
Brampton’s interests to fight for our fair share,” he told Y Media.

Brown said his top priorities for him are public safety and eliminating crime. “We need to give more resources to the police.”
Apart from these, he said as re-elected Mayor, he would focus on economic development and creating good-paying jobs in Brampton. He also told Y Media that he wanted to see a multipurpose cricket facility built in the City.
On Nikki Kaur’s termination from her job at the City of Brampton, Mayor Brown said the council didn’t make this decision.
“Nikki Kaur’s superiors at City Hall” terminated her,” he said. “I think the council’s reaction when we heard that the CEO had fired her was almost surprising that it hadn’t happened before. Deloitte investigation said that she had lied. She had put her phone in water to try to cover it up. A lot of people thought she should have been fired then. But you know, the city administration was very lenient on her after numerous ethical lapses and mistakes. So it’s not a big surprise. Hopefully, we don’t see that type of waste again in the future.”

You can watch this exclusive interview only on Channel Y Bell 828, Telus 2418, Rogers 857, Ignite 707 and Y Media Plus. For more information, you can also visit our website, southasiandaily.com or ymediaplus.com. Follow us on our Twitter and Facebook pages: Y Media, to stay updated with the latest events. Read our ‘Midweek’ newspaper published every Tuesday to know what is happening in Canada and worldwide.

Share
Facebook
Twitter
Pinterest
WhatsApp
Previous article
14 Indian films to be screened at 44th Festival des 3 Continents
Next article
Y Media Exclusive: I Will Not Be Silenced, Will Fight This Injustice: Former Mayoral Candidate Nikki Kaur Says After Getting Terminated From Her Job At The City Of Brampton