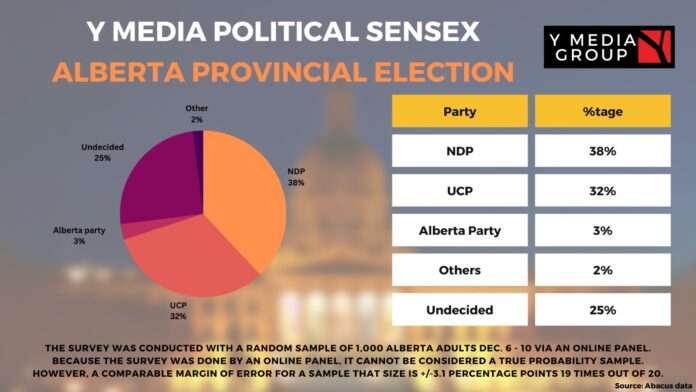 Key Takeaways:
1. Only 25% of Albertans think the province is headed in the right direction.
2. The top issues are cost of living, healthcare, the economy, taxes, and housing.
3. Rachel Notley is viewed more positively than Danielle Smith.
4. NDP leads the UCP by 9 among decided voters. 25% of Albertans are undecided.
5. But the gap is only 4 points on preferred premier: Notley 52% vs. Smith 48%.
6. Understanding how “reluctant UCP” voters react over the next few months will be critical to anticipating the results of the next election.

If an election was held today, the Alberta NDP would likely win more votes. Among the entire electorate, 38% would vote NDP, 32% UCP, 3% for the Alberta Party and 2% for other parties. 25% say they are undecided.

NOTLEY BARELY AHEAD OF SMITH AS PREFERRED PREMIER

Despite a 9-point lead among decided voters, Albertans are split on who they would prefer to be Premier after the next election. 52% would prefer Rachel Notley while 48% would prefer Danielle Smith.

This snapshot of Alberta public opinion points to an advantage for the Alberta NDP and Rachel Notley in the early days of Danielle Smith’s time in office. The Alberta NDP has a lead in vote intentions, the more popular leader, and issues ownership on more of the top issues for voters.

Danielle Smith starts her mandate as Premier with a mixed-opinion environment. The UCP has an equal-sized voter pool as the NDP but the Premier’s image is more negative than Rachel Notley’s, a significant portion of 2019 UCP voters believe she will be worse as premier than Jason Kenney, and she trails Notley on some key issues.

But to really understand the dynamics heading into the next election, we need to step away from demographic or regional comparisons, and focus on segments of the electorate based on their past and intended behaviours and preferences.

The survey was conducted with 1,000 Alberta adults from December 6 to 10, 2022. A random sample of panelists were invited to complete the survey from a set of partner panels based on the Lucid exchange platform. These partners are typically double opt-in survey panels, blended to manage out potential skews in the data from a single source.

The margin of error for a comparable probability-based random sample of the same size is +/- 3.1%, 19 times out of 20.

The data were weighted according to census data to ensure that the sample matched Alberta’s population according to age, gender, educational attainment, and region. Totals may not add up to 100 due to rounding.

This survey was paid for by Abacus Data Inc.